A FEMTOSECOND LASER FOR PREPARATION

The first step in the Lasik operation is to make a very thin flap on the surface of the cornea, called the hood or corneal flap. Thus, a first, femtosecond laser produces this corneal flap.

AN EXCIMER LASER FOR TREATMENT

The surgeon lifts the previously made hood in order to apply the excimer laser. Thus, this step makes it possible to correct the visual defect by modifying the bend radius of the cornea.

Once the laser has completed its treatment, the flap is repositioned. There are no stitches – the flap adheres by simple capillary action in the hours following the intervention.

The anaesthesia is local and carried out via anaesthetising eye drops – there is no injection or general anaesthesia.
The intervention is completely painless and lasts only ten minutes. After the operation, you may feel as though you have dust in your eye, and the eyes may water slightly.
Visual acuity returns quickly, within hours. You must not rub your eyes during the first hours after the procedure, but you can resume normal activity the next day.
We operate on both eyes at the same time.

Lasik corrects hypermetropia up to +7, myopia up to -12, astigmatism and presbyopia. This technique is therefore suitable in the majority of cases.

The 100% Laser is the latest, most reliable and safest technique used to correct visual defects such as myopia, presbyopia, astigmatism and hypermetropia.

This technique is completely painless and visual recovery is very fast, taking just a few hours. 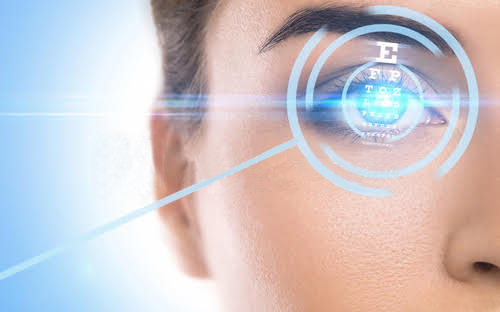 HOW TO FIND US?